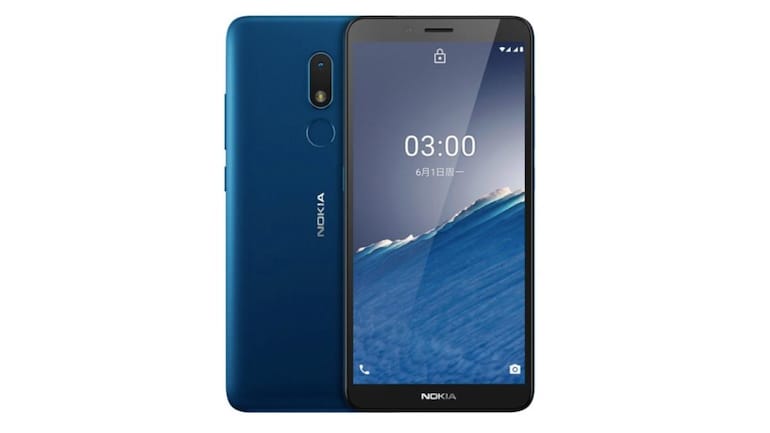 HMD Global have officially announced the Nokia C3 in China days after it began cropping up on certification websites. As suggested by the listings on certification websites, the Nokia C3 has a Unisoc processor, which was named GamoraPlus, and single cameras on each side.The latest entry-level smartphone which follows on from the launch of the Nokia C1 and C2 device is exclusively for the Chinese market while its international availability is not confirmed yet.

The Nokia C3 is an entry-level smartphone, which means you are basically getting the essentials without any frills. There’s even the age-old case of having a removable battery so you don’t get overly quirky and too expectant. But then, the Nokia C3 smartphone does well to keep the lights on while running the most basic tasks thrown at it.There is a 5.99-inch HD+ display with a resolution of 720×1440 pixels and a peak brightness of 400 nits. The display does not have any notches or punch-holes: it is the conventional one with rounded edges. The smartphone has thin bezels, but the ones on the top and the bottom are thick enough to house the front camera and Nokia logo, respectively. The bottom chin also has a front-firing speaker on the Nokia C3.The Nokia C3 is powered by an octa-core Unisoc processor paired with a moderate 3GB of RAM and 32GB of internal storage, which can be expanded via microSD card of up to 128GB. The smartphone runs Android 10 (Go edition) with customisations for the Chinese market.For photography, the Nokia C3 doesn’t break any benchmarks or set records with its 8-megapixel rear camera and a 5-megapixel front-facing camera. If reports are anything to go by these days, there is an LED flash and a fingerprint sensor on the back, as well.The Nokia C3 is backed by a 3040mAh battery that is removable though does it’s bit to keep that public notion of “Nokia devices = Long battery life”. For connectivity, the Nokia C3 has Wi-Fi, Bluetooth, GPS, 4G VoLTE, and a 3.5mm headphone jack among others. The Nokia C3 also has an FM radio. 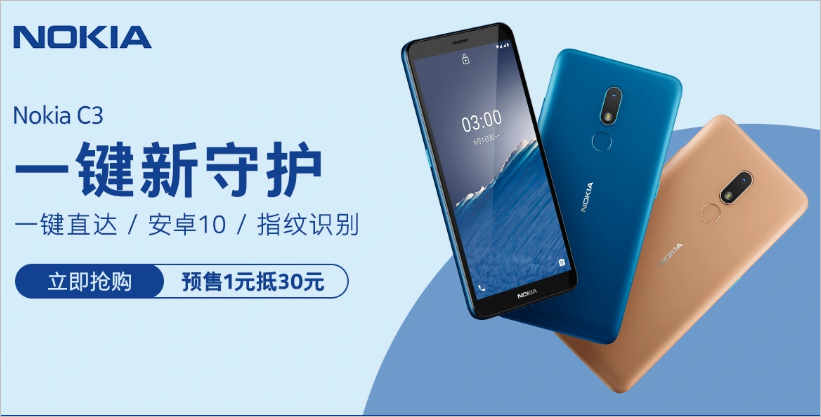 As we said, global availability is not confirmed for the Nokia C3 right now but if that changes, we will still bring you information as soon as possible.The Nokia C3 is priced at CNY 699 (roughly Rs 7,500) for the lonesome variant. The smartphone comes in Nordic Blue and Sand Gold colourways. It is available via e-commerce websites, including JD.com, in China. The Nokia C3 comes with a 2-year warranty and monthly updates, as well.

Nokia phone family in India have been given a boost as HMD Global have announced the launched of the Nokia C3 on Tuesday after a long wait, alongside their other latest members, including the Nokia 125, and Nokia 150.

The Finnish company has so far found solace and a slight return to success in the budget and entry-level smartphone segment with offer of functional Android One devices.

It has launched the entry-level Nokia C3 smartphone and Nokia 125, Nokia 150 feature phones in India. Nokia C3 was launched sometime back in China with low-end specifications but stock Android software while the two feature phones are just additions to the strong portfolio HMD Global enjoys in India.

Here, we take a look at everything new with the trio of newly launched Nokia smartphones.

Arguably the peak of the entire bunch, the Nokia C3 brings a 5.99-inch HD+ LCD display without a notch or a punch-hole, very much akin with its predecessor, the Nokia C2. There is an octa-crore Unisoc SC9863A processor running on Android 10 and is paired with up to 3GB of RAM and 32GB of internal storage, with the ability to be expanded via a microSD card of up to 128GB.

However, the main downgrade here is a 3040mAh battery that can be removed after you take the back panel off. Not least for the moderate battery capacity but I couldn’t find a reason to make it removable.

The Nokia C3 is scheduled to go on sale starting September 17 but the pre-orders will begin on September 10 on Nokia official online store.

Moreover, you also get the 1-year replacement guarantee on the Nokia C3 and 2-years of software and security updates much like select smartphones HMD Global has launched preciously.

Next on the line is the Nokia 125 feature phone. I mean, it’s only in 2020 that a feature could garner much attention right?

As a feature phone, the Nokia 125 provides you with the basics. A 2.4-inch colour display with a T9 keyboard. It has the iconic Snake game and offers FM radio. It can store up to 2,000 contacts and 500 SMS on its storage but there is no support for microSD card on it. It is a dumbed-down smartphone that you can use for calling, texting, and listening to FM radio.

Anything other than this lot, you’re definitely on your own!!

So, if you are looking for a phone that has the Nokia brand slapped on it (not the copyrighted market types) and provides you with the basics, Nokia 125 could be one of the options. It costs Rs 1,999 and comes in Charcoal Black and Powder White colours. It is now available to purchase from Nokia online store and mobile retailers across the globe.

Last on the bill but definitely not the last of this lot we get to see from Nokia. The Nokia 150 feature phone is everything double what you get on the Nokia 125 though a slight resemblance here-and-there.

Nokia 150 has a 2.4-inch colour display with a T9 keyboard but a larger footprint than that of the Nokia 125. It supports the FM radio function without the headphones, unlike the Nokia 125. This one also has the Snake game and a battery which Nokia says will last you for weeks*.

An upgrade over the Nokia 125 definitely means a slight shake of the wallet again. The Nokia 150 offers things such as FM radio and an MP3 player. It comes in Red, Cyan, and Black colours for a price of Rs 2,299. The sale for the Nokia 150 is now live across retailers in India.