Tecno Spark 5 and Tecno Spark 5 Air smartphones have been unveiled. The entry level phones by Transsion parent company succeeds the Spark 4 series that was launched late 2019 in Nigeria.

Although the key specifications of the newly launched Tecno Spark 5 and Spark 5 Air are near-identical, one of the major differences between the two phones has you to be the screen size. 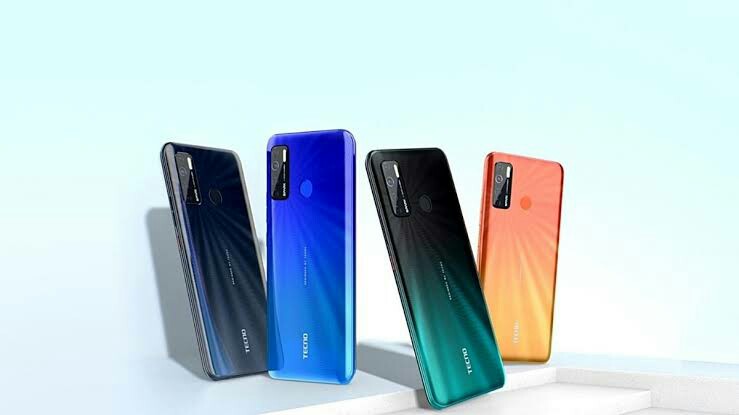 The Tecno Spark 5 comes with quad rear cameras while the Spark 5 Air has three cameras on the rear. Both the phones are offered in four colour options and pack 2GB RAM as well as 5000mAh battery.

There’s a fingerprint sensor on the rear panel and the phone supports Face Unlock.

For the camera section, the quad rear setup features a 13MP sensor in the main module with an f/1.8 aperture. This one is supported by a quad LED flash, also fairly rare. Next to those are a 2MP macro camera, a 2MP depth sensor… and a fourth camera… probably AI??!

Honestly, the function of that one isn’t made clear in the official specs, we think it’s just there to boost the camera count.

Impressively, the 8MP waterdrop-style selfie camera which can be located at the rear left corner is joined by a dual LED flash – single LEDs on the front are quite rare, two of them even more so. We’re not sure that the 90.2% StB ratio is correct, but unless you care about number bragging, it’s not much of an issue.

The Tecno Spark 5 further packs a 5000mAh battery with no fast charging support. The phone comes with 32GB inbuilt storage and it is unclear whether it is expandable. For connectivity, the phone includes 3.5mm audio jack, USB-Type C port, Bluetooth and Wi-Fi. The phone also comes with an Ambient Light sensor, Proximity sensor, and Accelerometer.

The phone runs Android 10 (Go edition) with HiOS 6 on top and also supports Face Unlock. Similar to the Spark 5, the processor make is unclear and there’s 2GB RAM. Additionally, there’s a fingerprint sensor on the rear panel.

The camera arrangements and specs on the Spark 5 Air are all similar to the Tecno Spark 5 smartphone.

Tecno Spark 5 Air also packs a 5000mAh battery with no fast charging support. The phone comes with 32GB in-built storage and it is unclear whether it is expandable. The connectivity options and the sensors on Tecno 5 Air are similar to Tecno Spark 5 device.

The new smartphones by Tecno Mobiles have been launched in Ghana. While the Tecno Spark 5 is priced at GHS 719 (roughly ₦49,000) for the single 2GB + 32GB storage variant, the price details of the Tecno 5 Air are currently unknown.

There are four colors variants to choose from for the two devices: Misty Grey, Vacation Blue, Ice Jadeite, Spark Orange.