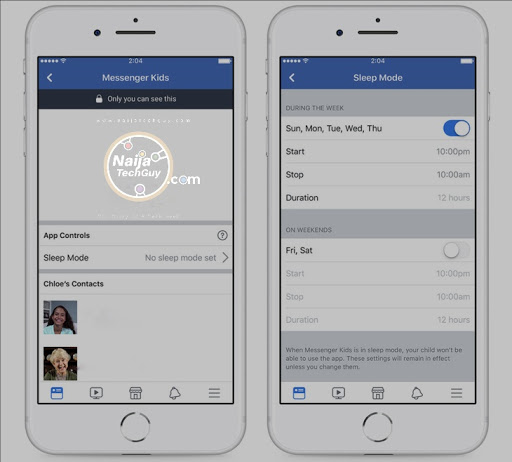 Facebook’s Messenger kids, the social network’s new chat app for the under-13 crowd, has been designed to give parents more control over their kids’ contact list. Today, the app is gaining a new feature, “sleep mode,” aimed at giving parents the ability to turn the app off at designated times. The idea is that parents and children will talk about when it’s appropriate to send messages to friends and family, and when it’s time for other activities – like homework or bedtime, for example.
The app, which launched last December, has not been without controversy.
Some see it as a gateway drug for Facebook proper. Others whine that “kids should be playing outside!” – as if kids don’t engage in all sorts of activities, including device usage, at times. And of course, amid Facebook’s numerous scandals around data privacy, it’s hard for some parents to fathom installing a Facebook-operated anything on their child’s phone or tablet.
But the reality, from down here in the parenting trenches, is that kids are messaging anyway and we’re desperately short on tools.
Instead of apps built with children’s and parents’ needs in mind, our kids are fumbling around on their own, making mistakes, then having their devices taken away in punishment.
The truth is, with the kids, it’s too late to put the toothpaste back in the tube. Our children are FaceTime’ing their way through Roblox playdates, they’re texting grandma and grandpa, they’re watching YouTube instead of TV, and they’re begging for too-adult apps like Snapchat – so they can play with the face filters – and Musical.ly, which hasa lot of inappropriate content,
(Seriously, can someone launch kid-safe versions?)

Until Messenger Kids, parents haven’t been offered any social or messaging apps built with monitoring and education in mind. 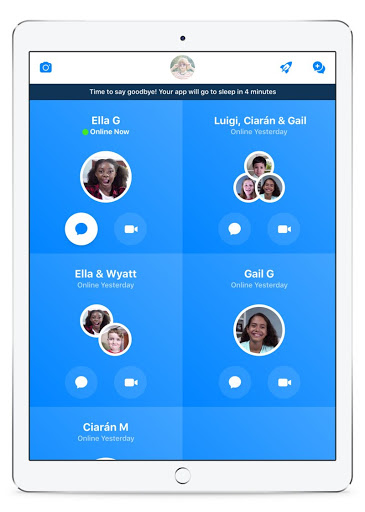 Unlike child predator playground like Kik, popularity-focused social apps like Instagram, or apps where messages simply vanish like Snapchat, Messenger Kids lets parents choose the contact list and control the experience. And, as a backup, I have a copy of the app on my own phone, so I can spot check messages sent when I’m not around.
With the new sleep mode feature, I can now turn Messenger Kids off at certain times. That means no more 8 AM video calls to the BFF. (Yes, we’ve discussed this – after the fact. Sorry, BFF’s parents.) And no more messaging right at bedtime, either.
To configure sleep mode, parents access the Messenger Kids controls from the main Facebook app, and tap on the child’s name. You can create different settings for weekdays and weekends. If the child tries to use the app during these times, they’ll instead see a message that says the app is in sleep mode and to come back later. 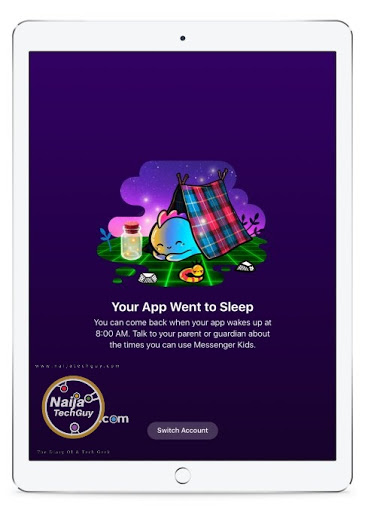 The control panel is also where parents can add and remove contacts, delete the child’s account, or create a new account.
Facebook suggests that parents have a discussion with kids about the boundaries they’re creating when turning on sleep mode.
That may seem obvious, but it’s surprisingly not. I’ve actually heard some parents scoff at parental control features because they think it’s about offloading the job of parenting to technology. It’s not. It’s about using tools and parenting techniques together – whether that’s internet off times, device or app “bedtimes,” internet filtering, or whatever other mechanisms parents employ.
I understand if you can’t get past the fact that the app is from Facebook, of all places. Or you have a philosophical point of view on using Facebook products. But Facebook integration means this app could scale. In the few months it’s been live, the app has been download around 325,000 times, according to data from Sensor Tower.
Messenger Kids is a free download on IOS and Android.
Please Share and comment 👇 your thoughts:

Related Topics:news
Up Next

What if your Deleted WeChat Messages Were Not Deleted?