Connect with us
Normally when it comes to drones, we all expect all drones to be very expensive but there are actually a few drones that are budget friendly with specifications that are not too bad.

I got my hands on a H37 drone review unit (thanks to PrimeHomes ) and I spent 3 days handling the mini quad-copter drone and I’m quite impressed with the drone.

What’s In The Box?

The drone comes in a portable box. There’s nothing to flashy about the packaging so I’ll go straight to what’s inside.

Inside the box, you’ve got the Elfie Drone, USB Charger that looks like a Flash Drive. I actually thought it was a flash drive before I actually brought it out and examined it properly. 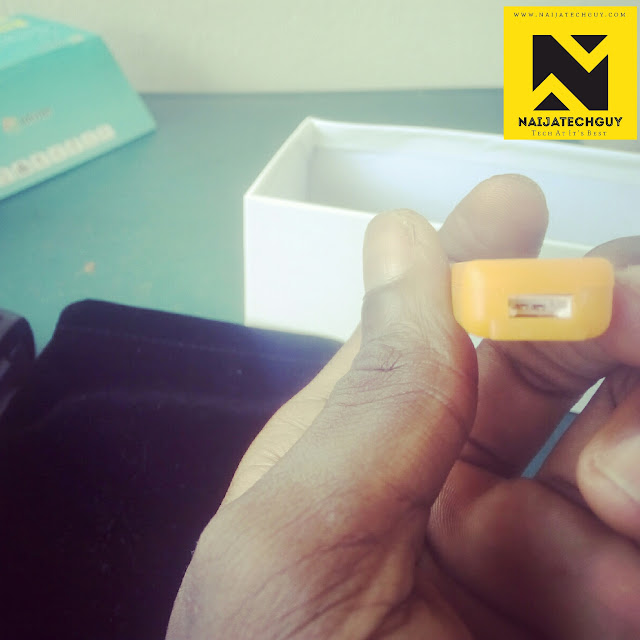 There’s also the Instructional Manual, a velvet pouch and an extra set of propellers just in case something goes wrong during the flight and any of your drone’s propellers gets damaged. 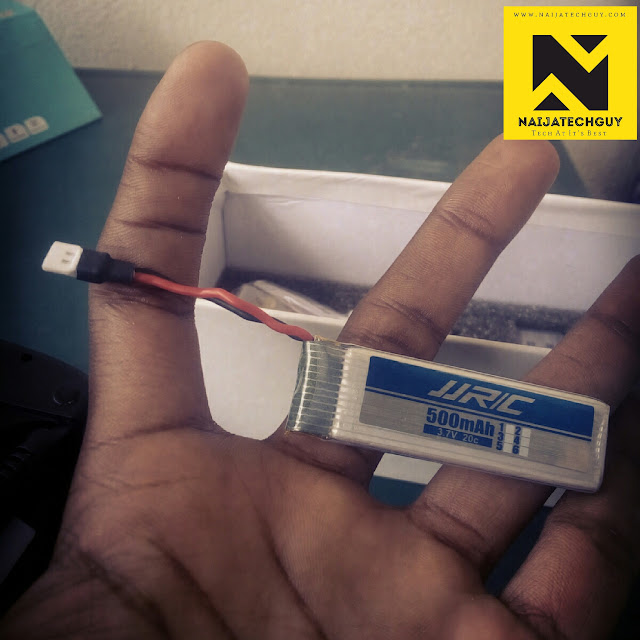 The JJRC H37 Elfie Drone comes with a 500 mAh LiPo Battery. The first time I opened the back of the drone, the battery wasn’t plugged in and I found it a little bit difficult fixing it correctly the first time but after fixing the battery about 3 – 4 times everything got quite easy. 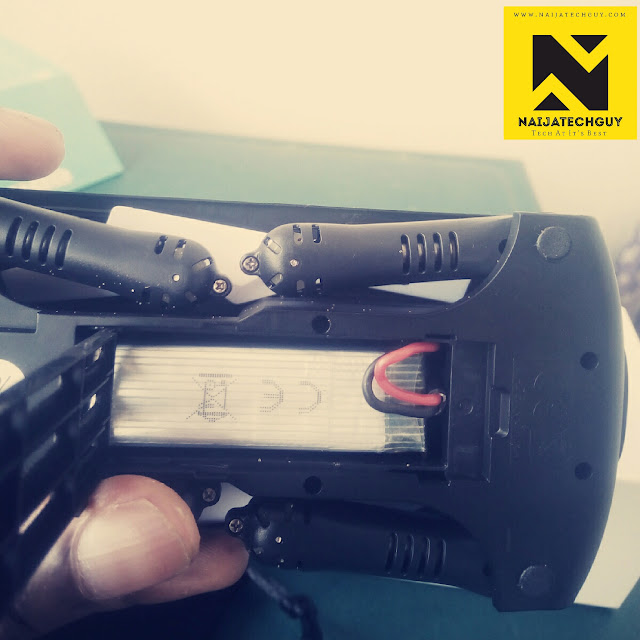 What I don’t really like about the battery is the fact that you have to remove it from the drone and charge it separately. Try to be careful when you’re handling the battery so you won’t end up cutting the wires while trying to unplug it.

The battery takes about 15-25 minutes to charge fully. Once the battery gets low, the drone would automatically shut down when you try to lift it off so you have to plug it in with the charger. 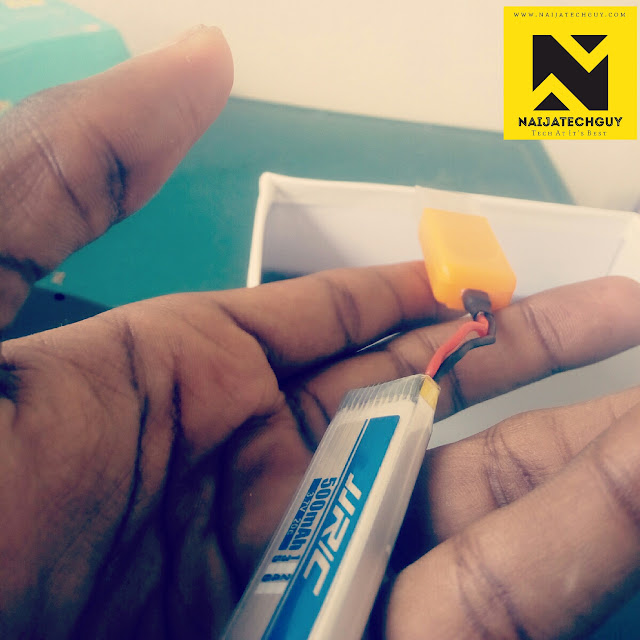 Once you plug it in the USB charger displays a red charging light and stops displaying once the battery is full. 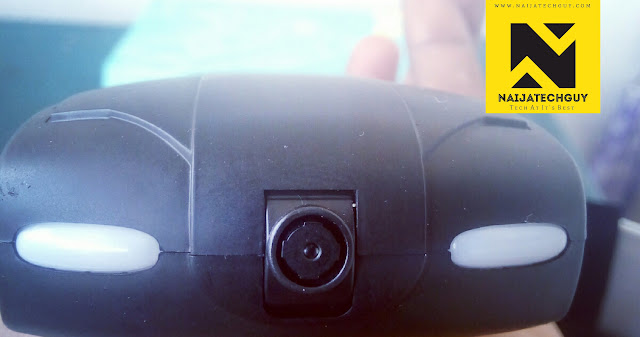 The camera is a wide range 0.3MP camera. Wi-Fi FPV allows the drone to capture photos and videos with resolution of 720 x 576 pixels. Recording up to five minutes of video only takes about 23 MB. All pictures and videos are stored directly on your smartphone hence there’s need for an SD card.

You can find the video files are stored in the VS FPV folder. 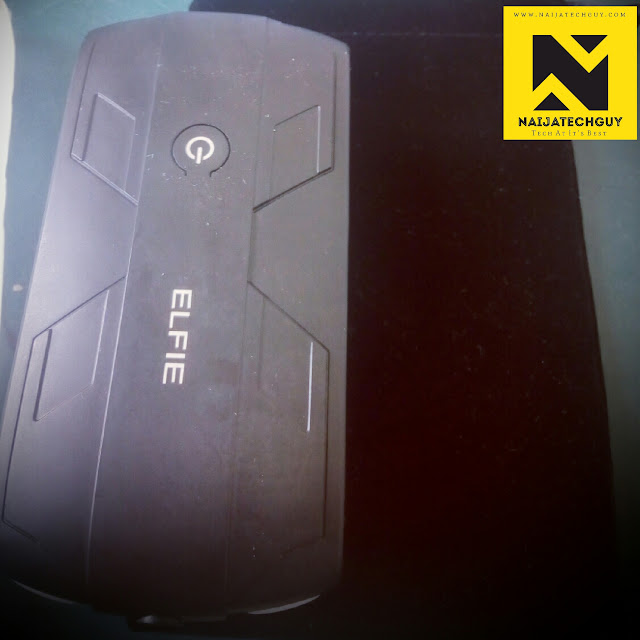 The camera’s real-time video feed can be displayed on your mobile device (smartphone/tablet) through the VS FPV App or in the folder of the app recommended by your manual. 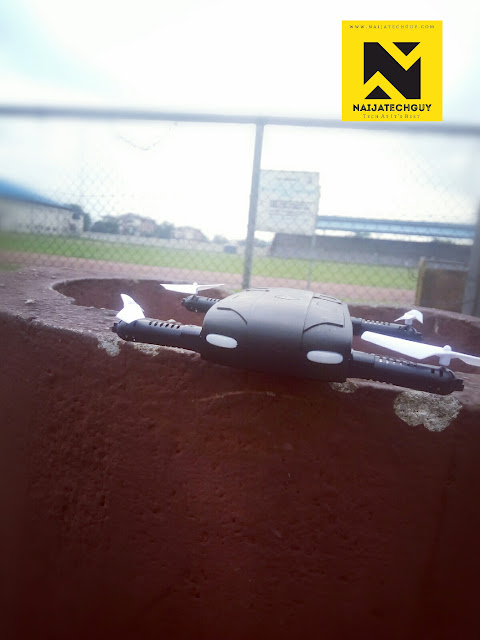 Note : Your Drone Manual may ask you to install a different App. My review unit requires VS FPV. 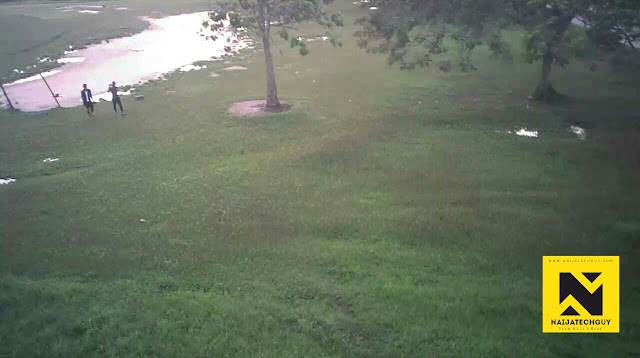 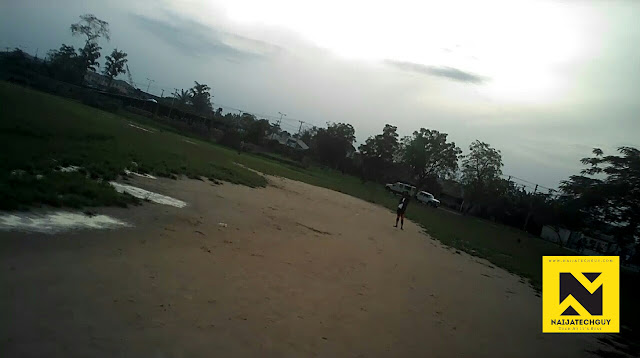 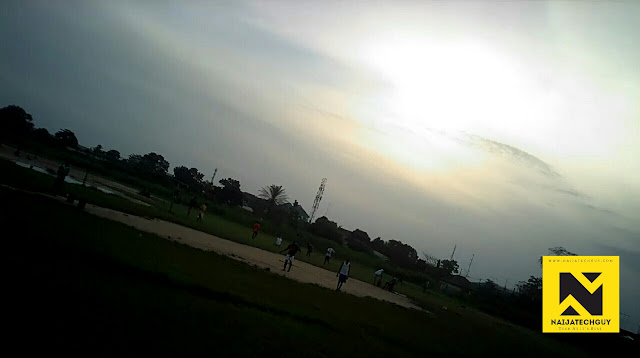 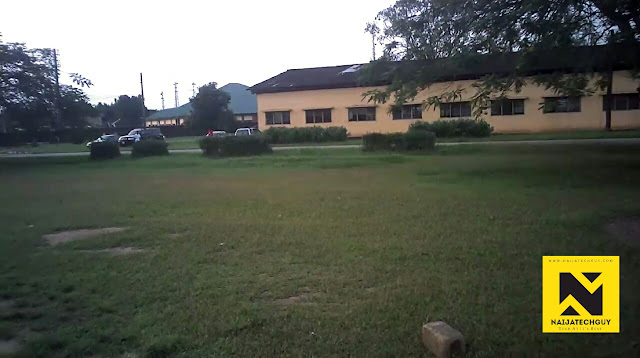 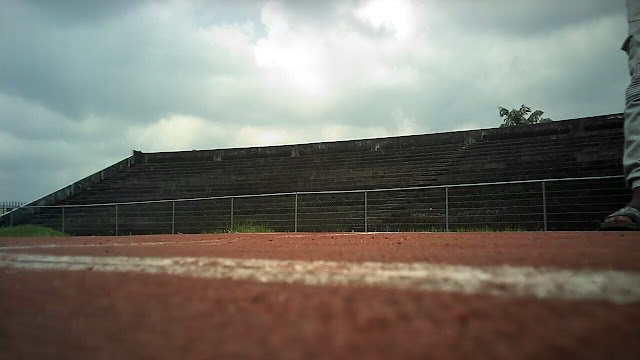 Before your first flight, you need the install the APP recommended on your manual on your mobile device. After unfolding the arms, power ON the quad and look turn on the app and connect to the drone’s wifi Hotspot. (It’s usually an open WiFi network)

Once it’s connected launch the app and tap on connect. You should see the live feed and the virtual joysticks displaying above the feed. Select On to turn on the drone. Usually, by default the propellers are automatically set to be in idle mode so you have to tap on the icon that’s located on the right side of the drone speed (the one displaying 30 is the drone speed)

Once you’re done, push up the throttle stick (left one) and the drone will start to rise. Please use your manual if you don’t understand. Trust me I tried flying the drone without reading the manual properly and I couldn’t even control it. 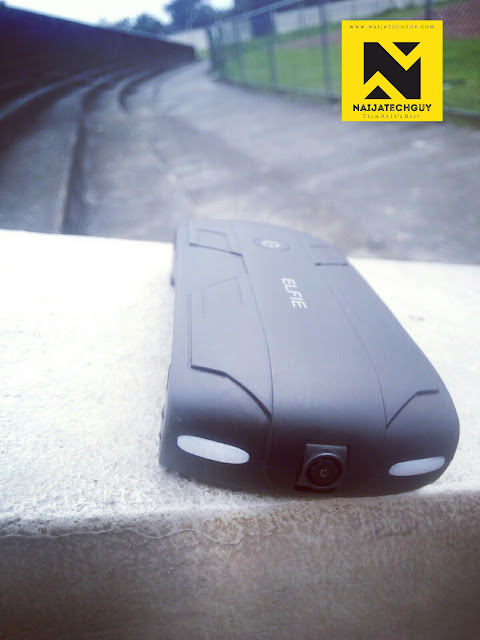 I don’t recommend flying indoors if you’ve not gotten used to the controls. It’s best you start outdoors.. Also I recommend you leave the default speed at 30 until you’re perfect with it.

In case of emergency you can use the “Stop” button, this will stop all the motors instantly.

You can control the drone in two ways, using the virtual sticks or through gravity sensor by tilting the phone. Basically the JJRC Elfie H37 can be controlled just the way you play a mobile game,

When you want to land your drone, you just need to press the arrow-down button, and the drone will land and stop its motors.

Common Issues With The Drone

Of course I won’t say I didn’t have my own share of technical mishaps when using the drone.

1. Drone Keeps Flying To One Side.

It means it’s miscalibrated and you need to recalibrate the drone. Place it on a flat surface and connect it to your phone and launch the app. Turn on the drone, go to settings (gear icon) and select calibration. ( it’s the last icon on the settings menu). When you do this, the drone’s front and rear LED lights would blink continuously for about 7-10 seconds. Once it’s done calibrating your drone is ready to fly.

2. Drone Not Turning On After Crash Landing

Unplug the battery and plug it in back.

3. Drone Goes Off When It’s About Taking Off
The battery’s probably low so all you have to do is to charge the battery

4. Camera Feed Not Displaying On Your Phone

Simply close the app (don’t minimize it). Turn off your WiFi and turn it on again. Once you’re reconnected to the drone, launch the app and connect. Everything should be okay

Pricing – You can get the drone for N25,500 on Konga or from PrimeHomesNg.

I’d say the drone is pretty good and one of the best at this price range, however I’m not okay with the fact that you’ll have to keep unplugging the battery to charge it and the lack of an obstacle sensor makes it a little bit difficult to handle in enclosed areas but anyone that can handle this drone perfectly would certainly have no problems handling the ones with obstacle sensors.

Samsung Bixby Assistant May Soon Be Available For Non-Samsung Users

If you talk to any fan of Game of Thrones books, it is likely that the delay in completing the next book, Winds of Winter, will be mentioned. Author George RR Martin has been releasing the book for more than 10 years ago, much to the chagrin of fans eager to read the book. Westeros’ next chapter of the world.

However, according to some discerning fans, the release may be closer than we think. Fans have put together some clues that suggest the release of an upcoming book soon. The first clue is on George RR Martin’s website in the “upcoming publications” section.

The page has a notice that encourages fans to check the site for future releases. It’s a pretty typical message but didn’t exist until a few days ago, suggesting a near future update.

In addition, the book website thewindsofwinter.com has recently changed ownership, according to one user. on twitter. The site has been inactive for years, giving yet another indication that the book may be imminent. Winds of Winter will be the penultimate book in the series.

However, fans of the Game of Thrones television series have the upcoming House of The Dragon to look forward to. This series will be based on the Targaryen Dynasty and its narrative will occur about 300 years before the events of the main series, before Daenerys and Jon Snow.

The series will be produced by HBO so we can count on the same atmosphere and quality of production that achieved so much in Game of Thrones. The origins of the Targaryen family and their dragons will be revealed during the series.

Red Dead Redemption 2 is now on Steam and the players are furious!

The desired arrival of Red Dead Redemption 2 on the PC came last month and was made available through the Rockstar and Epic Games store. However, the problems were many and the players were extremely frustrated.

Now the game is also available on Steam, giving the millions of players a glimmer of hope. However, Rockstar has clearly not learned from their mistakes and the players are furious.

Everyone expected the arrival of RDR 2 on Steam to happen smoothly and with the vast majority of previous problems resolved. However, besides that it did not happen, this release has caused even more problems.

As with so many other games, despite being available on Steam, Red Dead Redemption 2 remains released by launcher Rockstar. Many users have seen their Steam account associated with a Rockstar Social Club account to which they no longer have access.

Once this connection is made, you will only be able to play RDR 2 if you can win. access to your old account. Even worse, you’ll have even more problems if you eventually block access to your account by trying to find your old password.

Unlike in the Epic Games and Rockstar store, the Steam platform offers the ability to comment on any available game. So, with this big “wave” of trouble, a flood of negative comments has also come.

Many users are complaining about various issues with launcher of the game, which for one reason or another, simply is not able to start Red Dead Redemption 2. Apparently, a possible solution to this problem is to turn off the computer command by turning it on just after the game is released.

Rockstar is trying to solve all problems

Since the release of Red Dead Redemption 2 for PC that Rockstar has been working hard to try to solve every problem. In fact, the latest update has addressed many of the reported issues as well as the desired performance improvements.

Still, this second release made it very clear that RDR 2 for PC is far from promised. If you are looking forward to trying this game on your PC, I advise you to wait a little longer unless you want to spend this extremely frustrated Christmas with Rockstar.